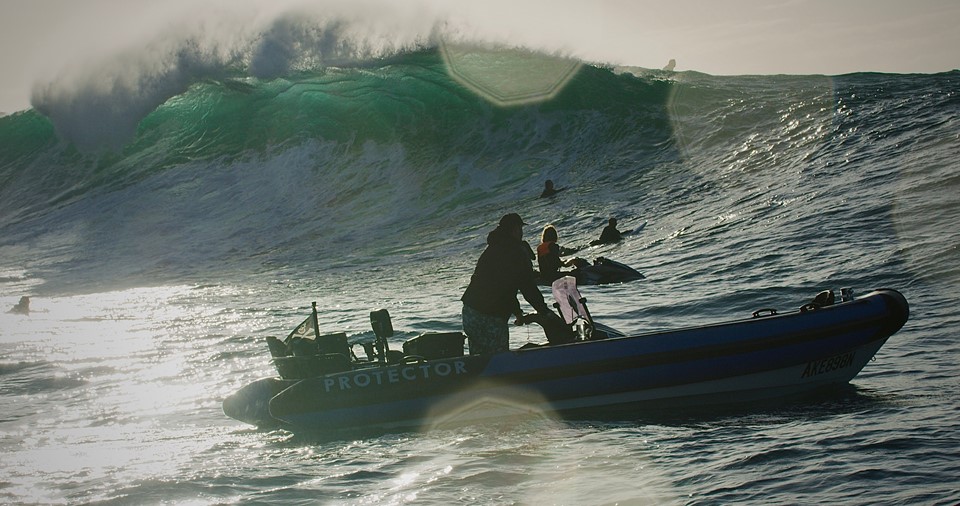 Chris Bryan is a jolly fellow who’s quick to laugh - and it’s easy to see why. His incredible job as a director of photography has him on or under the water most days, filming for surf films, nature documentaries, TV commercials and feature films like Point Break two.

He’s got a fair few awards on his shelf at home, he filmed Blue Planet 2 with David Attenborough and has worked for brands like Apple, Porsche and Sony.

On a recent trip to NZ, Chris took a couple rare and unique vessels home to Sydney that have changed the way he films on the water in rough conditions. We’re talking about the Rayglass Projet, a Protector RIB with a Yamaha Jetski built into its hull. 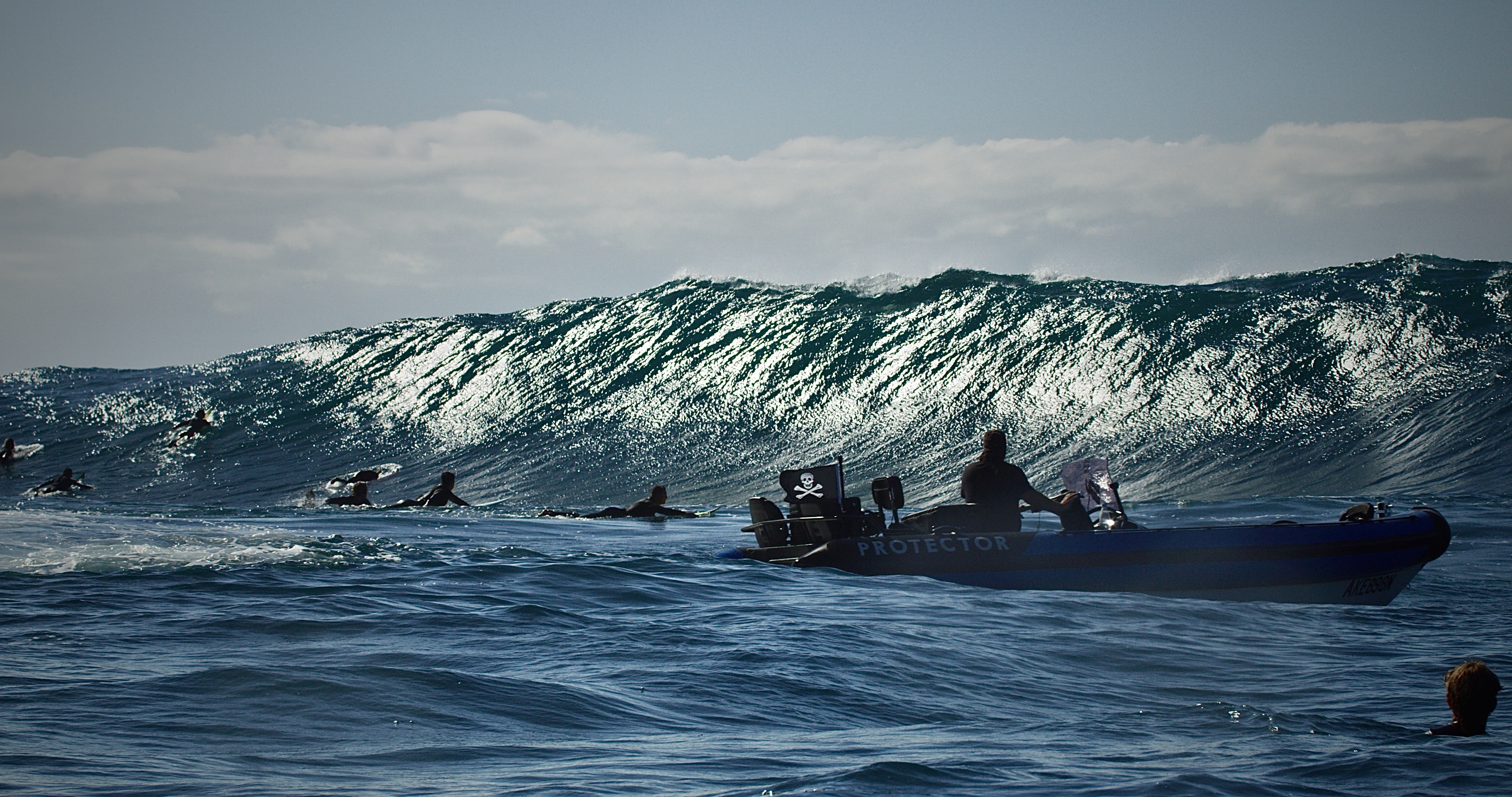 From Sydney to Taupo and back

While trawling TradeMe for a new filming vessel, Chris found two boats that were unlike anything he’d ever seen. These Rayglass Projets have Yamaha’s most powerful production jetskis moulded into their hulls, to combine the maneuverability of a jetski with the stability of a RIB.

Chris knew he’d struck gold so he bought both and shipped them back to Australia:

“I went to Taupo to test drive one and the owner wouldn’t let me in the driver’s seat. He said the water was too rough, even though it was a lake. I knew the Protector rep was good but I didn’t know what to expect,” Chris said.

“It crossed my mind that maybe there was a problem with it but I reckon he was just a bit protective of his boat because it was his baby. Apparently, only 14 were made.”

When Chris finally got home, he says he knew that he’d made the right decision:

“When I took them out I was ecstatic. You can drive them right through the surf like they’re a jetski. Every time they’re on the water, people are like ‘woooh I’ve never seen one of these!’” 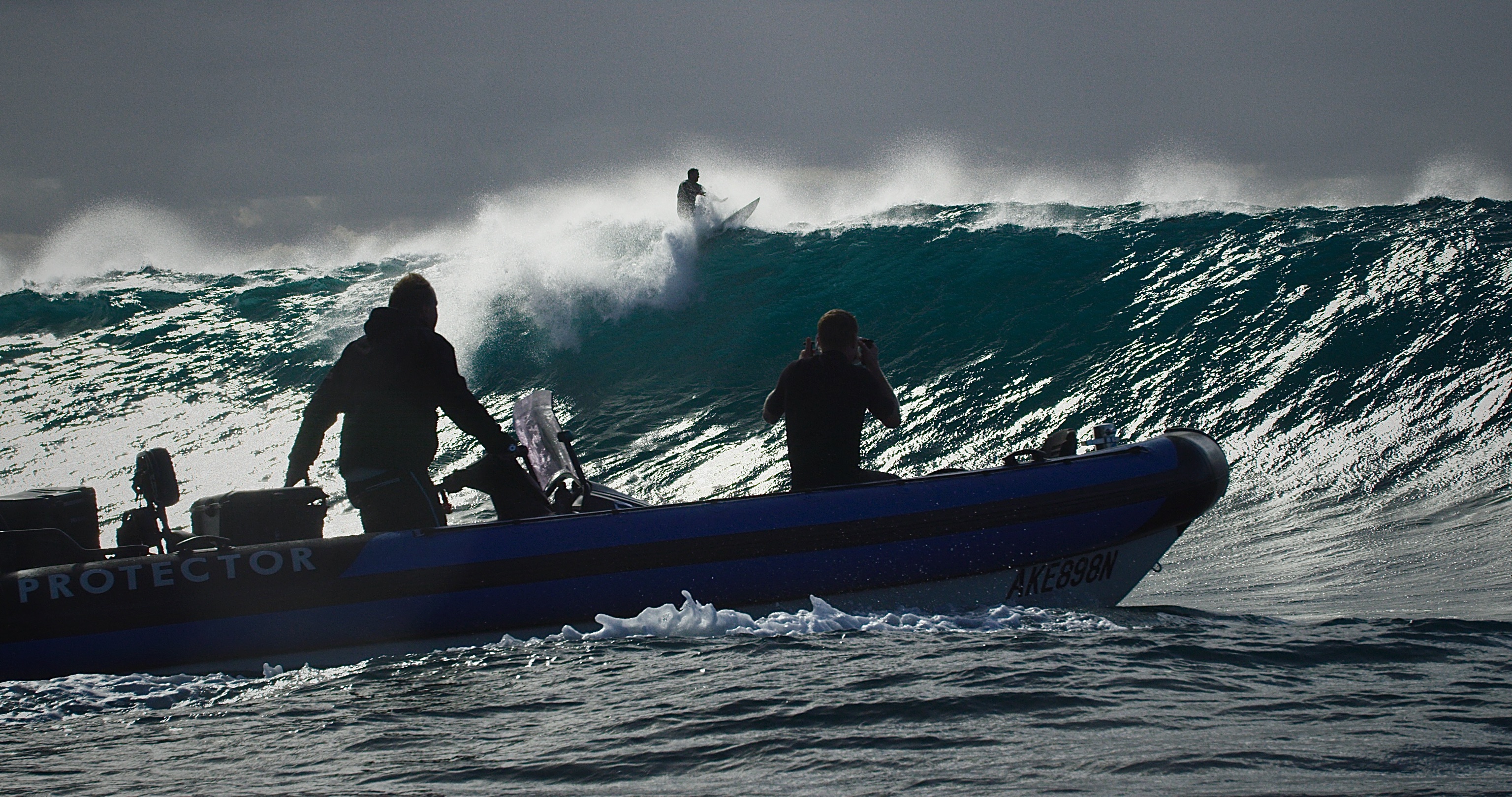 Chris has filmed at some of the world’s most remote and challenging locations, under towering surf breaks and over jagged reefs. From Hawaii, to South America, to the Great Barrier Reef.

Despite that, he’s never had a spill in his new Protector vessels - but he has come close once while filming at Depo, a famous surf on the south coast of NSW:

“We were in knee-deep water with big waves breaking. Me and my friend were in the backwash and just as we started going through, we ran through seaweed and it got stuck in the jet,” Chris said.

“We’re at walking pace and my friend’s sitting behind me. This 10-foot wave comes right at us and we just creep over it. Next thing, the boat’s fully vertical and just about to flip backward. We landed, my mate swum underneath and got rid of the seaweed and we got out of there.”

Chris reckons he’s able to do more out on the water in his Projet than any other vessel because of its power and stability:

“It’s ideal because of the jet unit. You can really punch through the waves and go places where you wouldn’t dream of taking an outboard.”

“People see the boat going through the surf and think ‘what is this idiot doing?’ But I have a lot of faith in this thing. Every time I take it out, it’s the most fun I’ve ever had on a boat.” 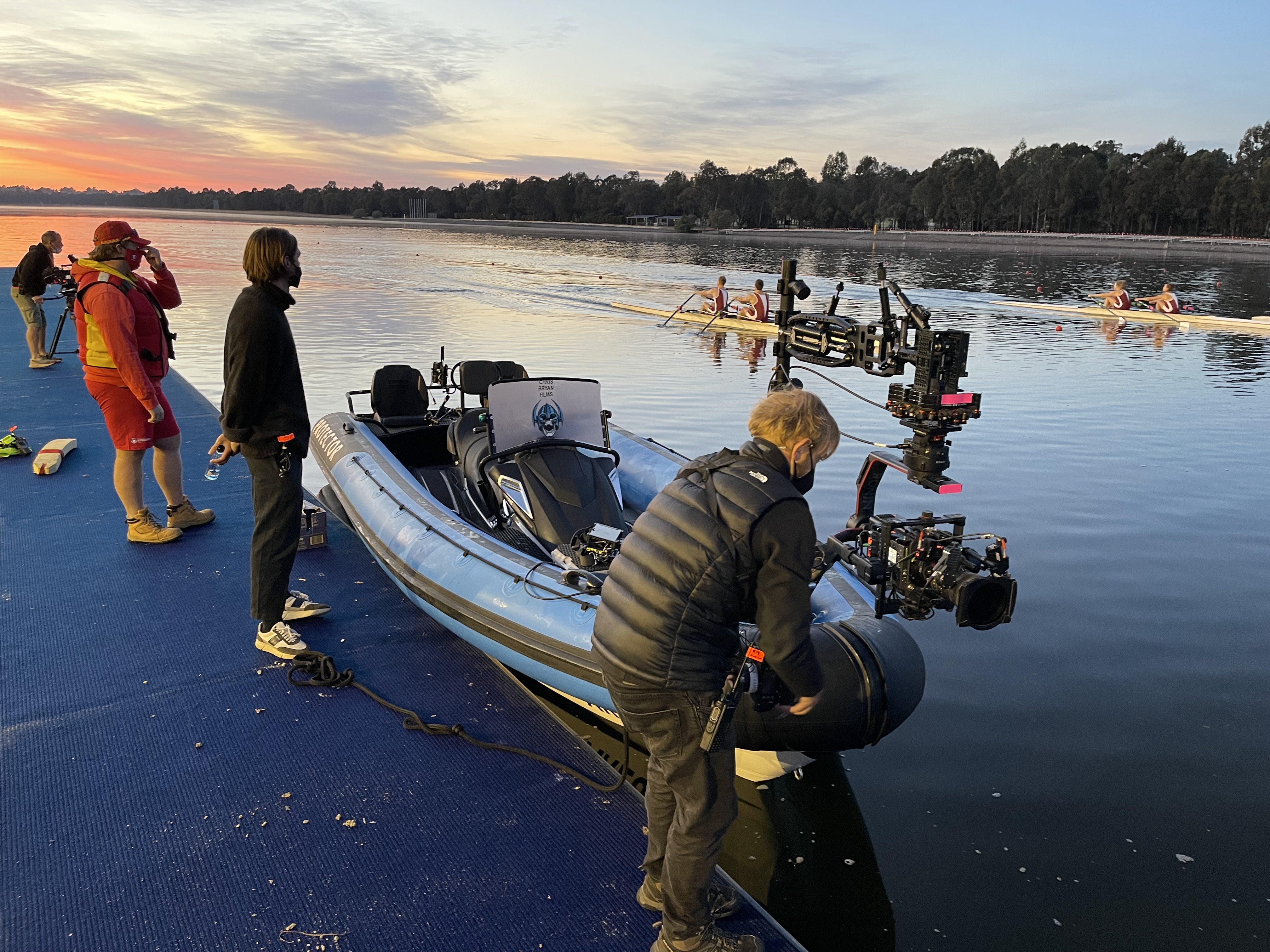 When we asked Chris his favourite place that he’s ever taken his Protector, he doesn’t even have to think about it:

“Definitely Western Australia. I’m from WA and my mum and dad keep one of my Protectors at their place. When I can, I fly back and take spare fuel and take the boat out to Esperance on the outer reefs all day.”

“There’s absolutely nobody there and there are monstrous waves. We take the boat out to the swell then drive it onto the beach and tie it off. Sometimes I even chuck a camp mattress in it and sleep in it overnight.”

Chris has the dream setup for trips like this including a little custom-mounted Weber BBQ on the transom, an esky up front for beers and a camera rig at front for tracking shots.

Another memorable moment with the Protector came when Chris was filming a documentary called Shark Beach on the Northern Coast with another Australian you might know - Chris Hemsworth. Being such a keen surfer, Hemsworth must have seen the potential of the Projet right away:

“I was using the Protector to film. As soon as Chris saw it he’s like - where did you get that? How much do you want for it?”

“Having a joke (since Chris Hemsworth could basically buy any boat on the planet) I said ‘na, sorry mate, you can’t afford this. Money can’t buy this boat.’ Everyone was laughing and Chris mentioned he might contact Rayglass to get himself one.”

We’re still waiting on that call from Chris Hemsworth, which we’re sure will come when he’s done filming the next Thor. In the meantime, we love hearing stories of Protector-mad boaties like Chris Bryan and we’d love to hear yours too.

Get in touch with us here to share your Rayglass stories with us or to visit us and view our full range of Protector vessels. 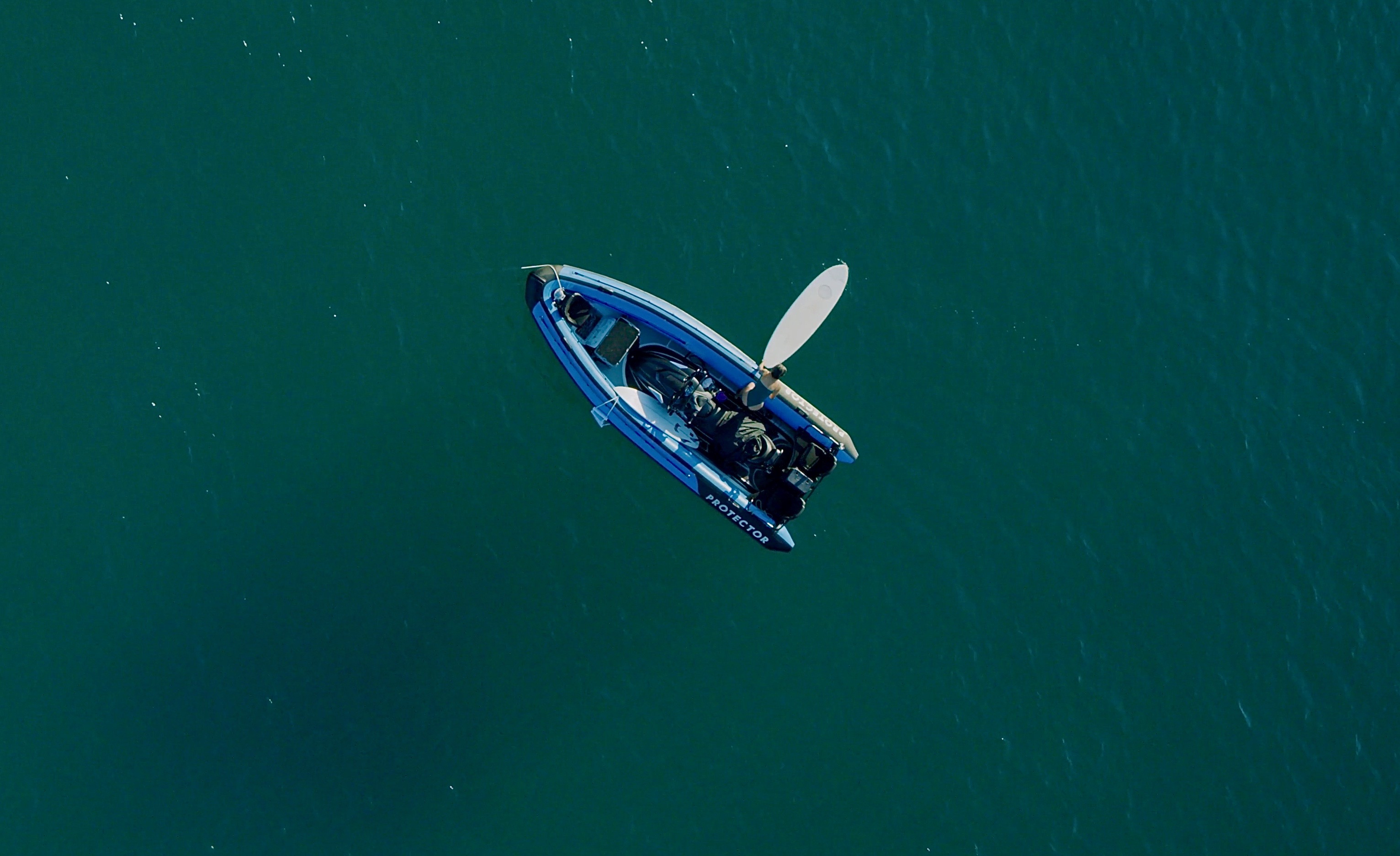 The Blackbird: Rayglass’s most impressive custom build yet

Rayglass recently strapped two 450 horsepower engines onto the back of a custom Protector Chase 330. This may be our meanest custom build to date.