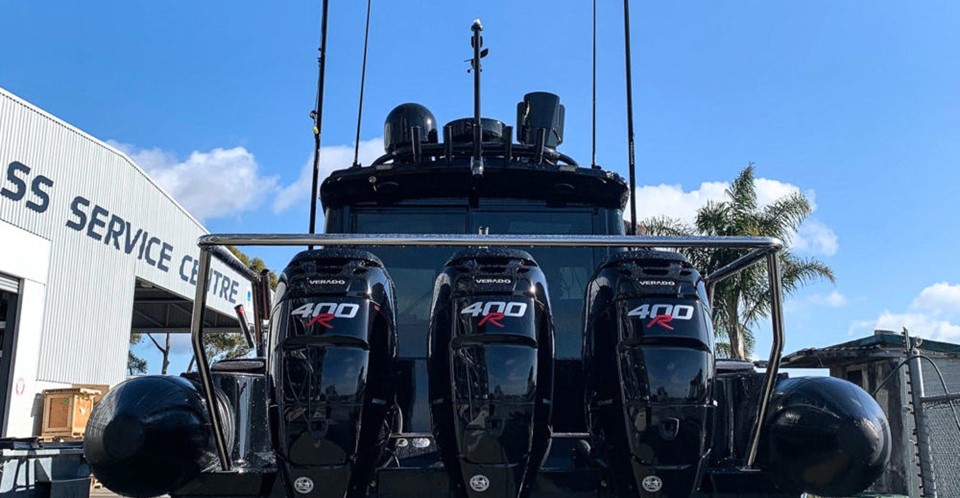 The Rayglass Protector 12.5m XL took the seas by storm in 2007.  At the time, it was the largest production RIB in the world, offering the ideal combination of high performance design and class-leading comfort.

It still stands apart as one of the Rayglass staff’s all-time most memorable projects.

Introducing the baddest boat on the water

When Rayglass commissioned the Protector 12.5 m XL back in 2007 it was one of the most impressive boats on the water in NZ. It featured a full custom black paint job, three 300hp Mercury Verado outboards and a full top-of-the-line Raymarine electronics suite including satellite TV and a FLIR (night vision) camera – the first of its kind in New Zealand.

This heavily modified Protector is one of the fastest RIBS in NZ.

Over the years, the owner used the boat for long-range, high-speed cruising to Great Barrier Island as well as to land big fish up in the Bay of Islands region. Since the boats delivery in 2008, the owner clocked up 1,900 hours out on the water. That’s the equivalent of over two and a half months straight out on the water!

The vessel returned to the Rayglass Service Department in June 2019 where we undertook a major refit to bring it back to ‘as new’ condition. The brief was simple – the owner wanted a new power plant and a slick paint job. Some base figures were worked out and a completion date was set.

It took a lot of work to get the Protector ready – but it was worth it.

Stage one: The Breakdown

The breakdown is a pretty easy job on most boats but when you’re dealing with parts which are no longer available, it needs to be careful and calculated. Everything came off the Protector including stainless fittings, the windscreen and side windows – you name it. Stage one complete, now off to the paint shop.

The Protector had been used heavily and 11 years of sun and salt water had started to wear down its black gel coat and paint job. The re-paint was completed by Advanced Marine Spray Painting and they had their work cut out for them.

The brief was to make the cabin top essentially looking brand new – a big ask! The process included grinding, re-fibreglassing, fairing and more fairing, priming and then the re-painting.

After weeks of hard graft, the paint job was complete until we hit a spanner in the works.

“Let’s paint the window frames and hatches black as well,” said the owner.

“Black is the new silver.”

Done! All black frames and hatches. Now back to Rayglass for the refit.

High quality finishing is always a priority for the Rayglass team.

Very, very carefully we refitted all the parts that our apprentice had painstakingly polished. That included black speaker covers and black light bezels, etc – remember, black is the new silver! We also popped on superyacht spec underwater lights, a FLIR (night vision) camera and a 1Kw transducer.

Now for the fun part – the icing on the cake! We installed and re-rigged three grunty Mercury 400R outboards with 1,200hp in total. For comparison, that’s more horsepower than two brand new Ferrari 458 super cars combined.

The team at Lancer then re-roped the tubes with straight lines and we were done. But when we stood back and admired our work we noticed one thing was missing – window tints! Darkening the windows made a huge difference to the boat – it really tied together the entire build.

A thing of beauty.

The final custom graphics were fitted and a full detail was completed. The boat was ready for a sea trial. Engine testing exceeded the expectations of the owner and our service team – pulling a top speed of 50 knots. With an overall weight of 7.5 tonnes, it’s fair to say this is a pretty serious vessel!

Since we returned the boat to the owner in early July, he has already had a trip out to Great Barrier Island where everything performed seamlessly. Keep an eye out for this black beauty which will be seen game fishing and cruising in the gulf – though something tells us there might not be much ‘cruising’.

When the job was done the owner was stoked with the result and so were we.

Thanks to the owner!

Our service manager Tony would like to thank the owner by saying what a privilege it has been to work with a customer who knows what he wants and can make decisions on the spot. Without this kind of partnership in such a huge project, it would be difficult to achieve perfect results.

We went a little crazy with this one: Mad Hatter Legend 2350

The Mad Hatter is a Rayglass Legend 2350 that we recently built for a Rotorua-based client. We went a little crazy with this one and included the b...

The 3500 is a luxury sedan cruiser and the flagship of the Rayglass range. We talked to Rayglass sales director Scott Little after he delivered hi...

From render to reality: Building a custom Protector 410 Chase

We recently built a custom Protector 410 chase as a tender for a Swedish superyacht. Take a look at our build process, from render to reality.